A ground-breaking research project sponsored by Yorkshire Wildlife Park is set to improve the lives and welfare of polar bears and help secure their future in light of the current climate emergency.

The initiative, which has brought together 35 leading scientists, researchers and polar bear experts from around the world, has just released findings that it is hoped will have a huge impact on the conservation and welfare of this at-risk species.

The "Bear Necessities" report was officially released to coincide with both International Polar Bear Week and COP 27 in Egypt, where world leaders are meeting to tackle global warming.

The report sets out a series of discoveries, from which recommendations have been made regarding the priorities for wildlife parks and zoos to ensure polar bears can thrive and provide insights that could inform conservation planning in the wild.

The park, which is home to eight polar bears, is at the forefront of global efforts to save the species, whose numbers are dropping alarmingly because the climate emergency is melting their sea-ice habitat, which has declined by 13% over the last decade.

Polar Project, the park’s ten-acre reserve which opened in 2016, is a leading site for conservation and its experts were part of the 35-strong panel engaged in the unprecedented knowledge-sharing initiative.

“We hope this will be a significant step forward in our collective endeavours to improve the welfare of polar bears in zoos around the world and, ultimately, in the wild,” said John Minion, Chief Executive of the 150-acre park at Branton, near Doncaster.

The report, based on a series of virtual workshops, focussed on understanding of the psychological priorities of polar bears so that habitat design, nutrition and enrichment, can be tailored to the fundamental needs of the species.

The report will influence captive breeding programmes in how they construct reserves to allow bears to move with purpose, build dens, make choices, undertake important natural behaviours and consume diets that mimic the natural feeding patterns they would experience in the wild.
Canada is home to at least two-thirds of the world’s polar bears, but their numbers are projected to decline by 30% by 2050.

Dr Jake Veasey, of the Anglo-Canadian consultancy Care for the Rare, which compiled the report, said: “The future looks increasingly bleak for polar bears so it is clearly time to consider radical, ethical solutions.”

He said that efforts to minimise the impact of climate emergency must continue and accelerate.

But he added: “We need to start considering a plan B for polar bears based around climate adaption as its already too late to put the genie back in the bottle for polar bears.

“Sea-ice losses in the Arctic are accelerating and will continue for decades beyond the world becoming carbon neutral.

“Added to this, human activity in the Arctic is on the rise meaning human-bear conflict will inevitably increasing meaning more bears will be destroyed or sent to captive environments, many of which, currently do not meet the bears needs.

“One of the key priorities we identified in the assessment is providing bears opportunities to move with purpose and make decisions to achieve biologically relevant outcomes. We are already working on addressing similar issues for tigers by radically reimagining their habitats and hope to start work on similar solutions for polar bears soon.

“An important spin-off from these welfare focused solutions which enable bears to behave more naturally, is they also provide a better model for us to try and understand how we might give nature a helping hand in adapting to Arctic warming in such as way as can support polar bears.

“This is a radical suggestion, but there has not been enough emphasis on climate adaptation for polar bears and strategies such as accelerating the northward migration of important plant species or even emergency supplemental feeding in the event of catastrophic summer sea-ice losses maybe necessary if polar bears are to survive the climate crisis in the wild.

“By providing larger spaces such as those at YWP, that also facilitate natural behaviour we can help establish ecosystem-based adaptation strategies."
YWP's Project Polar is the second largest polar bear facility in the world and the largest outside Canada and home to males Sisu, Luca, Nobby, Hamish, Indie and Yuma with Flocke and her daughter Tala living in a separate reserve.

“This is ground-breaking research which gives us significant advances in understanding both the welfare of bears under human care and in the wild,” said Dr Charlotte McDonald, Animal Director at Yorkshire Wildlife Park which, along with the Wildlife Foundation charity – based at YWP - , is at the forefront of conservation and research into under threat species.

Kim Wilkins, YWP’s Head of Carnivores, added: ”The feedback has been fascinating and it is a good reason to examine how and why we look after polar bears the way we do.

“The assessment showed that behaviourally, polar bears have more in common with Amur Tigers than they do with other bear species, and that their management should reflect that. It seems so obvious now, but t isn’t the way the species have been managed around the world and these insights are going to transform our approach to their care.”

It is hoped that insights from the project, which is backed by Canada’s Accredited Zoos and Aquariums (CAZA) and the European Endangered species Program (EEP) for polar bears, will guide polar bear management in captive environments and inform global animal welfare policy.
The panel of experts, representing 26 organisations from eight countries, will continue to collaborate.

YWP’s contributing member Dr McDonald added: “We are one of the largest holders of polar bears in the world and one of the most experienced. It was important to share our knowledge and experience and for everyone to learn from the information and data that we have from caring for and observing polar bears.

“Our aim has always been to give them the best experience and life possible and to learn everything we can that will help the species survive in the wild.”

The Wildlife Foundation, based at the park, has been instrumental in launching and funding conservation and education initiatives that generate evidence about the shrinking Arctic sea ice and the habits of polar bears.

“Polar bear mothers in the wild have a hard time – impacted by oil and gas exploration but most of all by climate change and the loss of sea ice in the Arctic. Working together with YWP, the Wildlife Foundation will continue its efforts to conserve polar bears and inspire people to care about them and the Arctic,” said Trustee Cheryl Williams. 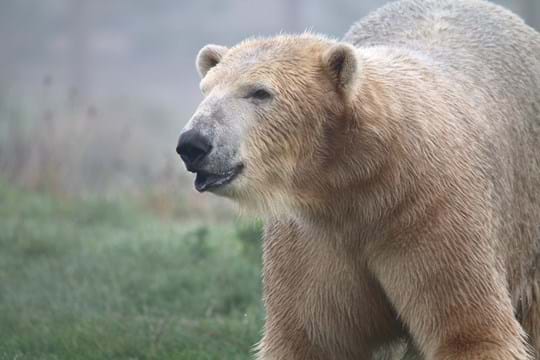