Rangers at Project Polar watched intently as two-and-half-year-olds Indie and Yuma were introduced to their elders Sisu and Nobby, who are more than twice their size and age!

The playful youngsters had been settling into their new home for almost a month before the time for a careful introduction was organised to make sure the bears reacted well together.

The process is delicate as polar bears are territorial but the four have been living next door to each other with a section of wire mesh fencing so they could get used to the sights, sound and smell of each other.

The introduction was an eagerly anticipated and meticulously planned moment at Project Polar, a global centre for conservation at the park at Auckley, near Doncaster.

Sisu was first in the welcoming party and responded swiftly with chuffing noises, making himself look small and walking backwards towards the lake to invite them for a swim. He was soon joined by the park’s other five-year-old polar Nobby and the four enjoyed a day of play and exploration. 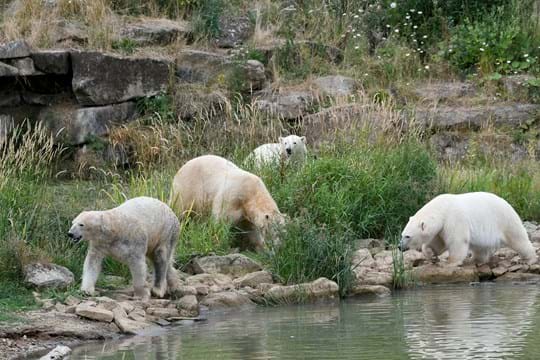 “When Polar Bears like each other, they make a chuffing noise. If they don’t like each other, we get lots of growls. To ensure the move ran smoothly, we got them used to all their new surroundings first and have now slowly began to integrate them with the other males,” said YWP’s  Head of Carnivores, Kim Wilkins. “We’re really experienced in mixing male bears as we’ve been doing it for a very long time now.

“The bears were cautious at first but were soon all playing together. It didn’t take them long to familiarise themselves with each other.

“The plan is to repeat the introductions and gradually increase the time as the bears get to know each other and hopefully before long they will all be able to live together which will be great for the four bears as they love to play.”

It was the Polar Bear equivalent of moving to big school when the two brothers were moved from their family group to their stunning new home at Project Polar.

Yuma and Indie arrived at YWP in June 2021 from Marineland in the south of France with their mother Flocke and sister Tala and before the big move had been living together in a separate family reserve.

The juvenile bears were at an age where they would start to live independently in the wild and they were becoming too big and boisterous for their mother Flocke, so rangers planned the move to give her more space. Flocke is still looking after their sister Tala.

Yuma and Indie were transported across the park to the main 10-acre Project Polar reserve in special transport crates in a meticulously planned operation. Rangers had been training the youngsters to enter the crates, rewarding them with treats including cubes of lard, cod liver oil, and squirts of whipped cream.

Having taken a day in the house to settle in they were let out into the extensive Project Polar 1, three interlocking reserves which include pools, a 7.5m deep lake, caves and rock covered terrain to mimic the Arctic Circle in the Summer. It is a purpose designed habitat for the bachelor Polar Bears that live there.

After nearly a month the decision was made to introduce them to their neighbours Sisu, 5,  and Nobby,9. The other inhabitants of Project Polar 1 are males ten year old Luka and four year old Hamish who will be introduced to the brothers later.

Project Polar is the largest Polar Bear Centre outside of Canada and is home to England’s only eight Polar Bears. It is at the forefront of international conservation and research initiatives that are working to save the largest land carnivore.

YWP, which puts conservation at the heart of all its activities, offers visitors a mesmerising walk-through experience, coming almost face to face with some of the world’s most beautiful and rare animals, including Amur Leopards and Tigers, Giraffes, Lions, Lemurs and Black Rhino.