The playful trio are full of fun and sure to become visitor favourites when they venture out into their reserve over the coming weeks.
Parents Alexandra and Orimar, were introduced to each other on their arrival in 2019 and have been inseparable ever since. They are doting on the pups who were born in early July.
They are part of the European breeding programme and important Ambassadors for their species.
“We’re delighted to have three new additions to the Otter family and hopefully it won’t be too long before they learn to swim and we see the new arrivals playing together in their lake,” said Animal Manager Rick Newton, at the award-winning 300-acre park at Auckley, near Doncaster.
“It is lovely to have triplet otters born so they will grow up together. Although it’s too early yet to tell the sex of the new triplets, it won’t be long before we can reveal their gender and pick names.” 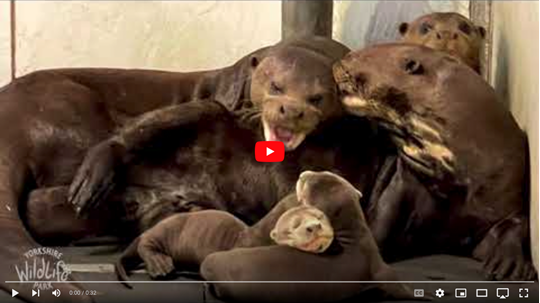 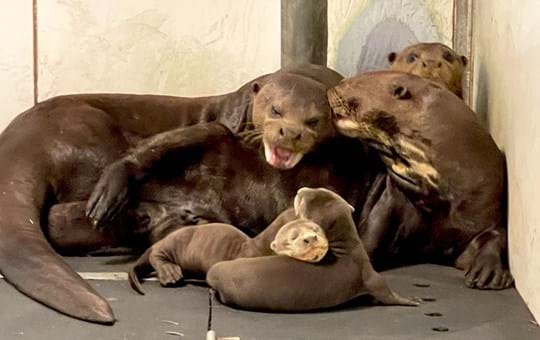 The triplets have a sister Bonita, the first Giant Otter cub born at the park on Boxing Day 2020. The species is endangered in its native Amazonian rain forests by deforestation, water pollution and hunting.
Thanks to visitor donations, the Wildlife Foundation, which is based at the park, has been instrumental in establishing projects to protect at-risk giant otter populations in Brazil. Conservation work has helped save giant otters from the brink of extinction in the rain forest, but the species remains under threat.
The Wildlife Foundation will be working closely with Instituto Araguaia in Brazil for the next three years on a sustained project to protect giant otters’ habitat and breeding sites.
The project will continue regular anti-poaching patrols in the giant otters’ habitat as well as create an environmental education centre that will help teach 300 underprivileged school children about conservation.
;