The four-month-old calf, named Mzimu, has finally ventured outside his enclosure with protective mum Ruby by his side. His first steps into the sunshine were captured eagerly by the Animal Team at the park.

We’ve been watching Mzimu closely as he has gradually become curious to explore. It’s been so nice to see him running around in the sunshine. The visitors who have spotted him already have been so excited!” said Kyrie Birkett, Deputy Team Leader - Hoofstock.

Okapi calves are very vulnerable in their first few months and little Mzimu has made amazing progress so far.

Okapis are on the IUCN red list of threatened species and Mzimu's birth, on November 30th, was the first okapi calf successfully bred at the park as part of a conservation programme. It is believed that there have been only 4 successful Okapi births in Europe during 2021. 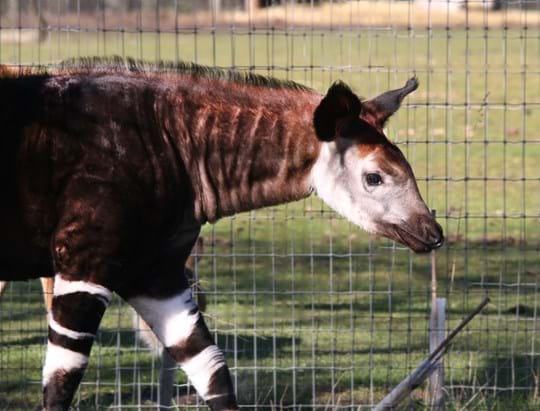 The 175 -acre park, at Auckley, near Doncaster, is one of only places in the UK where the traditionally shy and reclusive animals can be seen.

Kyrie added: “We are delighted to see Mzimu doing so well as okapis are so endangered. He was named Mzimu, which means ghost or spirit in Swahili because he was born a few hours before Halloween. He is the first calf for Ruby, who has been so protective over him."

Mum Ruby and dad Nuru arrived at the award-winning park in 2018 and are important members of the European Endangered Species Programme, and the birth of Mzimu was hailed as a major advance for the species. Nuru has now moved to Marwell as part of the breeding programme as his genes are so important to the programme.

The okapi, with its distinctive markings and often known as the forest giraffe, is under severe threat from poachers, logging, illegal mining and unrest in their native areas of the north eastern rainforests of the Democratic Republic of the Congo. Their numbers have plummeted from 250,000 in 1901 to around 10,000 today.

They can grow to almost five-foot-tall at the shoulder with an average body length of eight feet, weigh up to 350 kilograms and can live to 30 years. During the vulnerable first few months of a calf’s life, the mother Okapi will hide her youngster in a nest or undergrowth in the wild.

The park offers visitors the unique opportunity to get up close to over 70 species of beautiful and endangered animals, including the country’s only Polar Bears, Amur Tigers, Lions and Rhinos.